Learn from and Network with the Greener Side at the OMBC The good folks at the Greener Side have been through it all with the Oregon cannabis industry and have found a way to thrive and do good work. Starting operations at a time when being reimbursed for medical cannabis was a “gray area,” they know what it is like to be targeted by law enforcement. Having charges dismissed, they know what it is like to prevail against persecution. Seeing their work formally legalized, first for medical purposes and then for recreational, they have seen vindication. They have tackled regulatory hurdles and have still maintained a focus on helping patients in need. You can learn and network with the Greener Side at the upcoming Oregon Marijuana Business Conference (OMBC) on April 24th.

Anyone that meets Joe and Chelsea Hopkins knows that they are the very kind of people that you want in the cannabis industry. They have the combination of respecting the foundation of the cannabis movement with the foresight to know that the industry must adapt with the times and prevent potential backlashes due to bad publicity. They also know the importance of helping those desperately in need and always do what they can to assist patients.

Learning earlier than most about the importance of the cannabis industry giving back to the local community, the Greener Side organizes the Oregon Cannabis Classic golf tournament to raise money for the Oregon Chapter of the Multiple Sclerosis Society. In addition to the charity golf tournament, the Greener Side has pitched in on local canned food drives and have donated medicine to patients in need. This commitment to their community has helped their own dispensary, but also the cannabis community in general. When the Greener Side participates in local Chamber of Commerce events, they are doing good business for themselves, but also good politics for the cannabis community as a whole.

Chelsea Hopkins will be sharing what she has learned with OMBC attendees as there aren’t many dispensary operators that have been through the ups and downs as the industry as she has. Hopkins will be paired with a lawyer that will allow those managing a dispensary, or thinking of running one, to have their burning questions answered.

The Greener Side is also sponsoring the OMBC after party Sunday night that will feature an appearance by the great Tommy Chong. The OMBC, in addition to providing attendees with quality information, is a tremendous networking opportunity that is sure to be a great time as well. Please join the amazing folks at the Greener Side on April 24th at the Eugene Hilton. Get your tickets now before the event sells out. In the meantime, if you are 21 or older and in the Eugene area, be sure to visit the Greener Side at 1553 Oak Street; you can learn more about this great dispensary at www.keepeugenegreen.org. 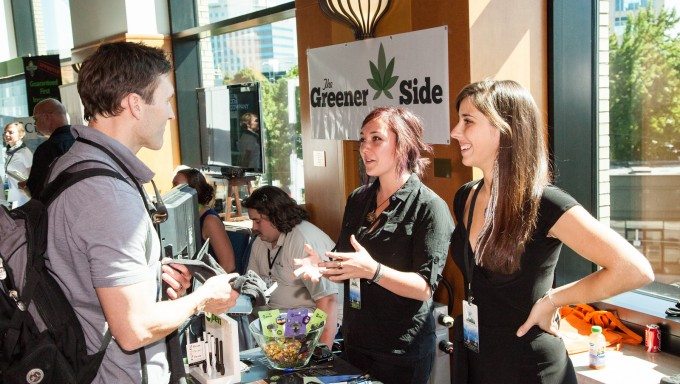