If Trump Fires Sessions Will the Cannabis Community Be Better Off? 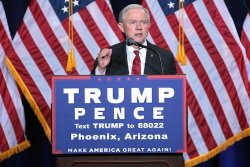 It is an understatement to say that Attorney General Jeff Sessions is no friend to the cannabis community. Throughout his political career, Sessions has been on the wrong side of history on marijuana, even joking that he thought the Klu Klux Klan were decent folks until he learned that some KKK members imbibe in the devil’s lettuce. Now that Sessions is clearly in Donald Trump’s doghouse (for recusing himself in the Russia investigation) and the AG is reportedly very upset with the president, we may see someone else leading the Justice Department very soon. If Donald Trump does indeed fire Jeff Sessions, will the cannabis industry and community, be better off? My gut reaction is that Drug War opponents can’t do any worse than Jeff Sessions, but, of course, someone about as bad, like Chris Christie or Rudy Giuliani, could be nominated to be our nation’s top law enforcement officer, and we haven’t made any progress at all.

The cannabis community, and Drug War reformers, were very wary of  Jeff Sessions‘ appointment to be Donald Trump’s attorney general, to say the least. While Trump promised to respect states’ rights on marijuana policy during the campaign, the president hasn’t been known to be very truthful, even by politicians’ standards, and campaign promises are broken frequently. Even Barack Obama, who implemented some positive cannabis and Drug War policies, raided state-legal medical marijuana providers during his first term, going against a pledge he made while campaigning in my home state of Oregon. Anyone that believes Donald Trump is welcome to buy a big beautiful bridge that I have to sell them, it truly is the best bridge. I have the best bridges.

The good news is that tough-but-dumb-on-crime candidates, Chris Christie and Rudy Giuliani, would have a very hard time getting confirmation. The bad news is that Jeff Sessions is scheduled to receive recommendations from his anti-crime task force regarding a new federal marijuana policy, a potential update of the Obama-era Cole Memo, by July 27th. If the Trump Justice Department enacts a new policy that infringes upon the will of the Oregon voters, the next AG may not be confirmed before the existing policy does some serious damage upon good people following their state’s marijuana law.

The truth of the matter is that Jeff Sessions, or any potential successor, cannot stop the long-term viability of the cannabis industry, nor will any federal official stop our community’s long march toward freedom and equality. So long as we keep making progress city by city, state by state and even country by country, the cannabis industry is too strong and the public’s support of legalization is too high, for any Reefer Madness-inspired Drug War dinosaur to stop our advances. However, AG Sessions, or his successor, can unnecessarily hurt the lives of some industry participants, medical patients and ordinary citizens that now rely upon state-regulated cannabis businesses and the jobs and revenue they generate.

Some politicians will even want to shrink from their duty to protect the will of their voters. However, many elected officials will want to stand up for their constituents and against the federal government’s trampling of states’ rights. It will be imperative of those in the cannabis industry, drug policy reformers, and everyone that supports the will of the voters, to empower the politicians standing up for the sensible cannabis policies that have better prioritized law enforcement resources, created jobs and generated so much revenue.

No matter who is the sitting attorney general, or the federal policies they enact, the fight to end cannabis prohibition and implement sound regulations that benefit patients, consumers, small farmers and mom-and-pop businesses will go on. One of the benefits of cannabis conferences is the sharing of ideas between those on the front lines of the Drug War. It has motivated me to help organize the International Cannabis Business Conference and the Oregon Marijuana Business Conference to help provide good information and networking opportunities to freedom fighters across the United States and the world. Meeting ICBC and OMBC attendees and learning of experiences of entrepreneurs and activists from across the globe always motivates me.

I hope to see many folks at the OMBC in November and the upcoming ICBCs in Kauai, San Francisco, and Berlin, Germany, in the coming months. Personally, while I feel for those that may be harmed by any misguided policies enacted by Jeff Sessions, or the next Trump AG, I know that a well-informed, motivated cannabis community, armed with great allies, united to fight for freedom, is ultimately unstoppable and will survive any Reefer Madness politician or policy.