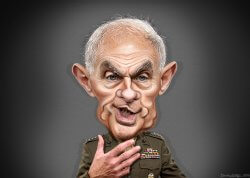 Yet another Trump cabinet position has been filled with an anti-marijuana drug war zealot. The Department of Homeland Security is now headed by 45 year Marine Corp vet, Gen. John Kelly. From the DHS announcement:

At DHS, President Trump said slowly, clearly, and repeatedly, “The DHS is a Law Enforcement Agency.” To DHS employees, he cajoled, “I’m asking all of you to enforce the laws.” Trump promised massive increases in detention centers near the border and 5,000 new border agents.

Although marijuana enforcement is not the primary role of this law enforcement agency, certainly the DHS will play an increasingly assertive drug war role and crush cannabis at every opportunity. John Kelly, the agency’s new head, has long been a drug war proponent and enemy of all things marijuana.

“Kelly is a big-time drug war zealot,” said Michael Collins, deputy director of Drug Policy Alliance’s office of national affairs. “As head of Southern Command he demonstrated that he is a true believer in the drug war, and it’s incredibly worrying that he could now head up Homeland Security.”

In that southern command role Kelly lamented that only lack of resources prevented drug war success. Jacob Sullum, examined some of Kelly’s drug war logic in Forbes and Reason.com. “John F. Kelly thinks the war on drugs is a failure because we do not spend enough on it.”

Kelly believes and spreads discredited gateway drug nonsense about marijuana and has stated that American legalizations have discouraged Latin neighbors in the war on drugs.

Strangely, if Donald Trump were choosing cabinet members just for their extreme anti-marijuana positions., he would have chosen these very persons who are now taking places at his table. On any consideration of marijuana, Trump cabinet meetings will be an echo chamber of anti-cannabis lies and will spawn vigorous federal attempts to set back state legalization. DHS and all the other agencies will march in step with Jeff Sessions’ Justice Department and again work to make criminals out of American marijuana entrepreneurs and consumers.