Don’t Miss Henry Rollins at the ICBC in San Francisco! 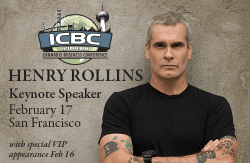 The upcoming International Cannabis Business Conference (ICBC) in San Francisco, will once again display revolutionary, unique thinking by featuring a keynote address by entertainment guru and internationally-famed rockstar Henry Rollins. The informative conference will take place for one day only on Friday, February 17th, but attendees will have the opportunity to mingle with the Rollins and other conference speakers at a VIP event the evening of the 16th.
Rollins is an acclaimed American musician, actor, writer, and comedian. Rollins hosts a weekly broadcast on NPR affiliate KCRW in Los Angeles and is a regular contributor to LA Weekly and Rolling Stone Australia, and he follows on the heels of previous ICBC keynoters such as former Surgeon General Joycelyn Elders, author and blogging pioneer Andrew Sullivan and travel guru Rick Steves.
Rollins is a true pioneer of contemporary American culture and a long-time human rights advocate, and is not shy about his feelings on cannabis. Rollins is known in political spaces for extensive work he has done to support gay rights and gay  marriage, and for his efforts to help exonerate the “West Memphis Three”, a group of three young men from West Memphis who many believe were wrongly accused of murder. Rollins has also done work with the Iraq and Afghanistan Veterans of America, the leading post-9/11 veteran empowerment organization.
Regarding cannabis, Rollins has been forthcoming. Henry attended the first High Times Cannabis Cup to be held in an adult-legal US state – it was 4/20 in Denver in 2014. While many “insiders” of the cannabis world have a lot of opinions about where we are going, Rollins’ ability to look at the external elements of the situation is obvious.
From Rollins’ Westword article about his Cannabis Cup experience:

Damn, that was a great day. We arrived at “The Cup” a little before the 1100 hrs. opening. The line stretched around the parking lot. Thanks to a media pass, I was one of the first ones in. I stood facing the doors, watching people stream past me. Mostly young, white and very excited. Lots of happy noise. People yelled “Happy 4-20, Henry!” at me as they poured into the massive Denver Mart for day two of this epic event. I read on CNN.com that “tens of thousands of visitors — by some estimates 80,000 — [have] come to Denver to mark 4-20 (April 20), a date that’s emerged as a holiday among those steeped in cannabis culture.
That’s a lot of people, but that’s missing the point. I don’t think there is a “cannabis culture,” any more than there is a “tobacco culture.” Cannabis consumption is not a fringe-element interest. Some might like to think it is, but that’s just prejudicial bullshit, intended to prolong the myth that only deviants and other undesirables seek out the weed.

“Henry Rollins is a name recognized through countless and widely-varied circles of artists, scholars, and political animals of many stripes,” says Alex Rogers, lead producer of the ICBC. “Henry has continued to push himself forward and to the brink physically, intellectually, emotionally, and in terms of social awareness over the past several decades. He is an out-of-the-box thinker who has been way ahead of his time on many social justice issues.”
The International Cannabis Business Conference in San Francisco will arm attendees with important knowledge about the California cannabis industry and business in general. Keynote speaker Henry Rollins provides industry participants with a fresh, outside-the-box voice from someone who has been outspoken and unafraid of taking calculated risks to make the world a more enriched place to be. Tickets are expected to sell out, so don’t wait to get yours!
This blog originally published at www.internationalcbc.com and has been reposted here with special permission.