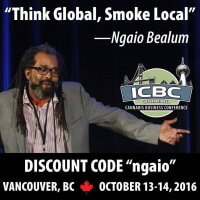 Cannabis comic extraordinaire Ngaio Bealum has brought his unique brand of comedy to cannabis events and clubs around the country, including emceeing the International Cannabis Business Conference (ICBC) in Portland, Oregon, and San Francisco, California. Ngaio will be joining us in Vancouver for the ICBC on October 13th and 14th, and he will help keep the event both informative and engaging.

If you have seen Ngaio’s comedy act before, or you’ve checked him out on Doug Benson’s Getting Doug with High, then you know the man has weed jokes for days. Ngaio has opened up for Weird Al and the great Dave Chappelle, and always has the audience laughing and having a great time. You don’t even have to be a cannabis user to enjoy Mr. Bealum’s comedy…but it does help.

If you’ve been to the ICBC before, then you know that Ngaio can think quickly on his feet and be very helpful with follow-up questions and commentary as he brings a wealth of experience and knowledge from years of activism and immersion within the California cannabis community. Ngaio has been an activist for a couple of decades, is a former editor of West Coast Cannabis magazine and has contributed articles for Alternet and the Guardian. Today, Bealum writes a marijuana advice column for the Sacramento News and Review and contributes to Freedom Leaf Magazine.

Ngaio wrote about his support  for California’s Proposition 64, expressing his support for small farmers, but recognizing the need to end criminal penalties, in Freedom Leaf Magazine:

As for big corporations taking over the cannabis industry, Prop 64 ensures that small-scale “boutique” grows have a spot in the marketplace. It may help to think of the new connoisseur paradigm the same way we think about beer. Sure, mass-market brands like Budweiser and Coors have a big share of the market, but where I live, we all drink local micro-brews. Craft cannabis is an emerging market niche, and growers with skill (and a good marketing plan) should have no trouble finding buyers, especially with the explosion in demand that legalization may bring.

Prop 64 is just a step. If it passes, it doesn’t mean that pot activism is over. There’s plenty more to do. We still need to get people out of jail, and there are folks awaiting trial on marijuana charges right now that could probably get them dropped if AUMA passes, such as long-time canna-activist Todd McCormick, who in August had his cultivation case delayed until after the election because prosecutors didn’t want to spend time and money prosecuting him if weed is going to be legal anyway. Freeing cannabis captives should be reason enough to vote for Prop 64.

The International Cannabis Business Conference is coming to Vancouver, British Columbia, at a great time as Canadian medical laws just changed and the nation is poised to help lead the global fight to end cannabis prohibition for all adults under Justin Trudeau’s Liberal Party. The ICBC is bringing together top lawyers, experts and entrepreneurs to discuss all things cannabis business and Ngaio Bealum will be there to help keep the whole operation educational and fun. Get your tickets for the ICBC today and check out Ngaio whenever you can, listen to his podcast on Cannabis Radio, and keep tabs on him via his Facebook and Twitter pages.

This blog was originally posted by International Cannabis Business Conference and reblogged here with special permission.