Coloradans May Soon be Allowed to Smoke Marijuana at Bars 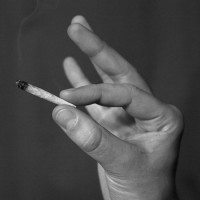 One of the biggest selling points of Colorado’s Amendment 64 that voters approved in 2012, legalizing the sale and consumption of marijuana for recreational use, was the idea that cannabis would be treated like alcohol in both regulation and consumption. In fact, the bill was literally named “The Regulate Marijuana Like Alcohol Act of 2012.” While the state has generally done a fine job of abiding by the spirit of the law, one issue has proven to be more complicated than the others: Public consumption. In a system that requires seed-to-sale tracking, strictly-defined security systems, and vertical integration, one would think that where one chooses to smoke would be the least of the state’s worries. Not so.

In Colorado you can legally sell weed, you can buy it, you can grow it. But you can’t smoke it anywhere other than your own private residence. Even then, if you’re a renter, you’re probably shit out of luck.

This presents an obvious problem for a state which suddenly has a major tourist attraction that doesn’t involve skiing, Broncos, and baseball: Where, exactly, can one smoke the marijuana that they have legally purchased? There are some “420-friendly” hotels, but most do not advertise themselves as such and require vaping which can be expensive for tourists who can’t legally travel with the “drug paraphernalia” required for this method of consumption. Cannabis clubs are mostly underground in Denver, which doesn’t permit them. Colorado’s second biggest city, Colorado Springs, has a few in operation, but they were only recently given an official green light by the conservative mecca’s powers that be. All of this is because Amendment 64 states that marijuana use–like alcohol–may not be consumed “openly and publicly.” This has led most city governments to outright ban the smoking of marijuana in public. Period.

Except that’s not how alcohol is actually regulated. The state of Colorado permits drinking at any place licensed for that purpose (“such as a tavern,” the state’s website helpfully points out). Beer with 3.2 alcohol percentage (by weight) can technically be consumed anywhere by state law, though local jurisdictions have the ability to restrict it. And, perhaps more importantly, this outright ban on the public consumption of marijuana is not what the authors of the bill had in mind when they put it to voters. Speaking with The Denver Post, Marijuana Policy Project’s Mason Tvert, who co-authored the bill said, “Amendment 64 intentionally did not prohibit private businesses from allowing adults to responsibly consume marijuana on the premises. I don’t know where they would get that. [Amendment 64] said it would be illegal to consume openly and publicly, but it’s not open or public if it’s in a private business.”

So Tvert and co-author Brian Vicente set out to change things. Again. Back in June they launched a new initiative: “the Denver Campaign for Limited Social Cannabis Consumption,” which would allow the “consumption of marijuana by individuals twenty-one years of age or older at certain premises that are not private residential property.” In other words, if a business wants to allow its adult customers to smoke marijuana on its premises, and it meets certain criteria, including abiding by the Colorado Clean Indoor Air Act which forbids indoor smoking, it should be allowed to do so. In order to get the initiative on the ballot, Tvert and Vicente had to collect 4,700 signatures no later than September 3rd.

Today the Limited Social Use campaign announced that they had nearly doubled that requirement, and almost a month early. The Associated Press reports that the campaign collected 8,000 signatures, meaning that, once the city clerk’s office verifies the signatures, Denver’s voters will have the opportunity this November to okay the consumption of marijuana under the limitations listed within the bill:

Patrons would have to bring their own weed and comply with clean-air laws. That means the marijuana would have to be edible, or if smoked, consumed on an outside patio shielded from public view.

A recent Public Policy Polling survey found that 56% of likely voters would support such a bill. If 2012 was any indication, this will likely be another positive step forward for marijuana reform in the state, and probably a good year for other progressive causes.

Correction: This article originally stated that “Colorado voters” will have the opportunity to okay the ballot initiative. The initiative will actually appear only on Denver city ballots this November once the city clerk confirms the validity of the signatures collected.