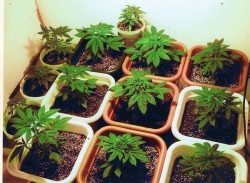 It requires a very specialized facility to keep bugs and disease out, and provide an optimal environment for cannabis plants to grow and thrive. Building such a facility is not cheaper. Some states are more expensive than others due to climate requirements and building codes. Per Biz Journals:

There can be extensive build-out costs in outfitting buildings for medical marijuana cultivation – and Arizona has some of the highest build-out costs in the country as a legalization effort could find its way on the 2016 ballot.

Jiyan Wei is the founder of BuildZoom Inc., the company analyzing building permit and construction data.

Wei and BuildZoom writer Greg Clifton found that behind Colorado – where marijuana is legal – Arizona has some of the highest construction build-out costs in the U.S.

Industrial cannabis gardens present unique obstacles and needs compared to other industrial facilities, even other gardening-based industrial facilities. Expect building code requirements to evolve with the growth of the industry, as well as security requirements and other requirements. If you are trying to become a large scale cultivator, make sure to research any provisions that you are required to follow, as they vary greatly from state to state.