After Another Successful OMBC, Organizers Prep for the Next ICBC in Berlin 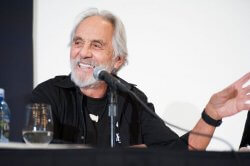 The Oregon Marijuana Business Conference (OMBC) last weekend was another sold-out event that brought cannabis industry participants, and those thinking of joining, to beautiful Ashland to learn the latest about Oregon’s medical and adult use cannabis laws. An amazing VIP pre-party on Friday kicked off the the conference as the Ashland Hills Hotel & Suites were excellent  hosts and Ed Rosenthal, the Guru of Ganja, and OMBC lead producer Alex Rogers shared a few words with party attendees. Compassionate Oregon hosted a great after-party following the VIP event and the OMBC staff and management were certainly very understanding of the celebratory mood of conference attendees.

Rosenthal, never one to mince words or sugar coat anything, kicked off the conference on Saturday morning with a keynote address that was both sobering about the potential challenges ahead, potentially from the incoming Donald Trump Administration, but also hopeful as he discussed that overcoming difficult times is nothing new to the cannabis community. The Guru of Ganja finished his address with a celebration of the cannabis plant and what it has done for himself and many others across the globe.

Rob Patridge, the Chair of the Oregon Liquor Control Commission (OLCC), ventured into the belly of the beast so to speak to discuss the OLCC’s regulations of the adult use commercial cannabis market. While no one is happy with all of the state’s regulations, many in the industry, at the OMBC and across the state, acknowledge that the OLCC has been relatively responsive to the needs of the industry. Chair Patridge took questions from the audience and two OLCC staffers, Amanda Borup and Danica Hibpshman, served on a couple of panels to provide the latest information for conference attendees. The OLCC contingent stressed that they want to help the cannabis industry to succeed and that questions can be directed to marijuana@oregon.gov.

All of the panels were filled with experts in various fields of the industry, as attendees learned about virtually every facet of the cannabis industry, including licensing; testing; packaging; labeling; employment law; intellectual property law; and new provisions in the law intended to help small farmers and those cultivating for patients. Steve Bloom’s interview with Tommy Chong capped off the conference as the cannabis cultural icon discussed politics, activism and his long career in music, comedy and the cannabis industry. OMBC attendees were then treated to an exclusive performance by hip-hop legend Del the Funky Homosapien, who once again rocked a packed Brickroom with his unique hip-hop style.

All of us working on the OMBC put in a ton of work and are proud to provide great information and networking opportunities for the amazing people in the cannabis industry. We are so excited to head to Europe for the first time as we organize the next International Cannabis Business Conference (ICBC) in Berlin on April 11-12, 2017. Germany has legalized medical cannabis and the economic powerhouse is poised to be a force in the international cannabis scene. We would like to thank everyone who helped with the OMBC, especially the vendors, speakers and attendees who make it all possible. If you are able, you should join us for a historic ICBC in Berlin as we continue the momentum behind our global fight for freedom for the cannabis community.