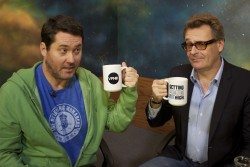 So, you just hit a jay straight to the face. Now you need some sort of entertainment. Sure, you could play a video game or watch the same old boring things on TV. But why not try watching some shows made just for people that really, really like weed?  Please use this handy-dandy listicle to get your stoner bingewatching on.

1. Getting Doug With High

Doug Benson has been an advocate for cannabis legalization for years. The star of  Super High Me also produces two other great shows: Doug Loves Movies, and Getting Doug with High.  GDWH (that’s what the fans call it) has a very simple premise: Doug’s  friends come to his studio basement(known as the Spacement), smoke weed, and chat.  It’s very entertaining. This episode with the dudes from Workaholics is one of the best:

Wow. These guys run Greenhouse Seeds in The Netherlands. Not only do they produce some super nice cannabis, they travel the world searching for rare old school cannabis strains to bring home and cultivate. It’s like he’s the “Indiana Stoned” of ancient pot plants. Check out this visit to Swaziland:

Coral Reefer started out with a twitter page and a love of cannabis.  Nowadays, her Stoney Sunday vlog is viewed by thousands of happy stoners all over the world.  This episode where her mom visits is particularly delightful.

B – Real is a legend in the cannabis community. He is the guy who popularized the blunt, for crying out loud.  His youtube channel is full of cool things, but the Smokebox series could be my favorite. it’s llike “Comics in Cars Getting Coffee”, but with weed. here he is with another legend, Tommy Chong: