What Exactly Is Marijuana Legalization?

I’ve been going rounds lately on social media with people who oppose the ResponsibleOhio plan to legalize marijuana in 2015. Many folks who are die-hard long-time marijuana activists hate this measure, because it limits the commerce in marijuana growing to just ten wealthy backers who’ve pledged $2 million each to the legalization campaign. People throw around the words “monopoly” (it isn’t, there are ten of them), “cartel” (it isn’t, they would all compete against one another), and “oligopoly” (market dominated only by the rich, which describes most American commercial markets) to deride ResponsibleOhio, but does that make it “not legalization”?

In 2014, the RAND Corporation produced a report for the state of Vermont. The report detailed twelve different regulatory schemes for marijuana (excluding for the moment medical marijuana – we’re talking marijuana laws for all people). Think of it like a number line or a spectrum of the possible systems that could be implemented for cannabis. It starts from the most-repressive regime to the most-free when it comes to marijuana. Here’s what they concluded: 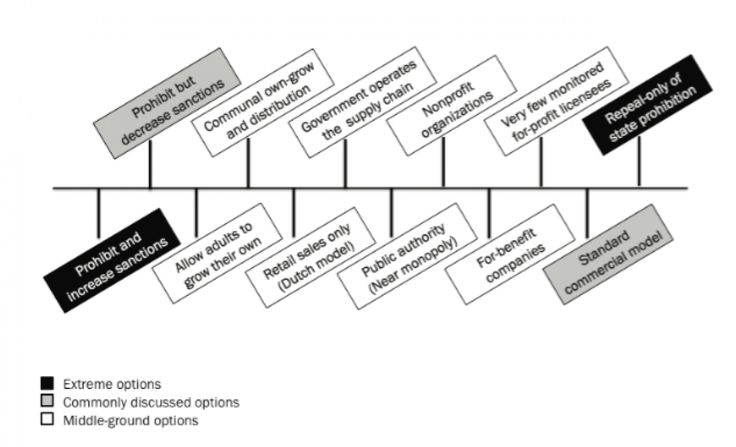 1) Prohibition = weed’s illegal to possess, grow, and sell. You get arrested and imprisoned for any of those activities (like 27 US states now).

2) Decriminalization = weed’s still illegal to possess, but doesn’t include an arrest and a criminal record, rather a ticket, a fine, and probable a driver’s license suspension (like 19 states now). Growing and selling are still crimes.

3) “Grow & Give” = weed’s legal to possess and grow and share for personal use, but selling is a crime (like Washington DC).

4) Collective Gardens = weed’s legal to possess and grow personally, and personal collectives can combine for growing and sharing among their members (like Spain), but no retail commerce.

5) Coffeehouses = weed’s legal to possess and you can buy it in limited amounts in retail stores, but growing is technically illegal (like The Netherlands).

6) Government Control = weed’s legal to possess and buy, but only the government can produce and sell (like Uruguay).

7) Public Authority = weed’s legal to possess and buy and the government strictly controls cultivation run under a few licensees (like a state-run liquor store model).

8) Non-Profits = weed’s legal to possess and buy and you can grow and sell it as a non-profit entity (like California, supposedly).

9) For-Benefit Corporations = weed’s legal to possess and buy and you can set up a private for-benefit corporation to grow and sell it (for-benefits exist in a few states like Vermont, they’re like non-profits in that they serve the public good, but they can make a limited profit).

10) Limited For-Profits = weed’s legal to possess and buy and you can set up a for-profit private corporation to grow and sell it, but the licenses are limited and highly-regulated by the government (like most East Coast medical marijuana states).

11) Commercial = weed’s legal to possess and buy and you can set up a for-profit corporation to grow and sell it (like Washington, Oregon, Alaska, and Colorado).

12) Deregulated = there are no laws on weed (like North Korea or what an East Texas State Representative proposed this year).

For me, if I’m living at #1 or #2 on that spectrum, I will support anything that moves my state up to #3 or better. ResponsibleOhio looks like a #7 to me. For the ResponsibleOhio haters, it seems like they’ll reject anything lower than #11.

But then, I’m just a consumer. I frame my view of legalization based on the facts that 7 out of 8 arrests for marijuana are consumers, not growers, and that anything that frees the consumers makes catching the growers far more difficult. Remember, it wasn’t just less-than-one-ounce arrests and prosecutions that declined following Washington and Colorado legalization. It was all marijuana arrests that declined, because many of the probable-cause tools cops use to bust people for any marijuana crime disappeared.

Actually, it’s simpler than that. I would never join Kevin Sabet, the DEA, the Drug Czar, and all the Ohio cops, prison guards, and rehabs in voting to keep 19,000 marijuana arrests happening in Ohio next year, and the year after, and the year after that.