Breaking: Sandra Bland’s mother filed a wrongful death lawsuit. “She never should have been inside of the jail.”

Previous update: Sandra Bland had 18 nanograms of active marijuana in her blood, raising even more questions in this tragic case.

I have been riveted to the case of Sandra Bland. If you haven’t been following, Sandra Bland was a 28-year-old African-American woman, active in the #BlackLivesMatter movement against police brutality. She had just moved to Hempstead, Texas, where she had accepted a new job at her alma mater, Prairie View A&M. She was pulled over by Texas State Trooper Brian Encinia on July 10, a Friday, when she didn’t signal a lane change while she was moving aside to let the speeding cop pass her. Trooper Encinia asked Bland if she was irritated, she replied that, yes, she was irritated by the traffic stop.

Encinia then asked her to extinguish her cigarette. Bland did not, asking what right he had to have her extinguish a cigarette in her own car? Encinia then ordered her out of the vehicle, Bland asked why she was being arrested, then Encinia brandished his Taser and shouted “I will light you up“. The situation escalated to the point where Encinia is slamming her to the ground, hitting her head, and replying “good” when she tells him she hit her head and suffers from epilepsy. Fourteen times Bland asks why she is being arrested, Encinia never answers her. Bland is repeatedly exclaiming, “I can’t wait to take this case to court!” A female officer arrives to assist and a bystander begins shooting cell phone video. The cops unsuccessfully and illegally attempt to intimidate the witness into not filming the scene. 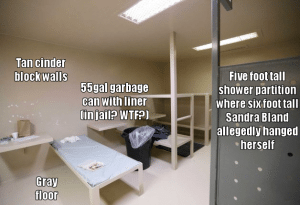 Bland is taken to the Waller County Jail. Saturday, she makes a call to a friend, expressing disbelief at the situation and trying to round up the $500 she needs to make a $5,000 bail. Three days later on Monday morning, according to police, cops check on her in the 7am hour, she says she’s fine. Around 8am, she calls on the intercom asking how to make a phone call, which she apparently never made. About 9am, a female officer discovers Bland’s dead body, where the six-foot-tall woman allegedly hanged herself by twisting an industrial-sized garbage bag into a ligature, hanging herself from a five-foot-tall partition. 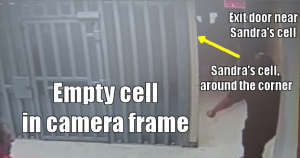 Numerous questions cast doubt on the official version of her death. Upon intake, she had checked a box indicating she had attempted suicide in the past. This should have gotten her an immediate mental health evaluation and elevated the surveillance she would have been subjected to in jail. Instead, she was placed in a cell conveniently located out of sight of the jail cameras, even though there was an empty cell right in camera frame.

Many people are pointing to her mug shot. Her eyes look empty and unfocused. Her dredlocks seem to be hanging backward, instead of laying downwards. Her shoulders seem too far back and her head is tilted in such a way you can see under her chin and up her nose. The background of her shot has the smooth, gray look of the jail cell floor, not the tan, cinder-block look of the wall present in everyone else’s jail photo. Was she already dead and photographed from above laid out on the floor?

I’ve been reporting on too many instances of police abuse of citizens to believe their version of events. Why did Sandra Bland have access to an industrial sized garbage can and its liner in her cell? I’ve been to jail; they take from you any shoelaces or belts and there is nothing in a cell that isn’t bolted down. Besides, what sort of garbage are you going to produce in a jail cell that requires a 50-gallon trash bag?

If you believe the police, the agility and creativity of black people when it comes to killing themselves in police custody is remarkable. Just last year, I reported on Victor White’s death in Louisiana. He was handcuffed behind his back, in the back of a cop’s car, when he somehow pulled a handgun that police never found when patting him down for the arrest, and shot himself in the chest from the front. The year before, it was Jesus Huerta in North Carolina, killing himself in much the same way. The year before that, it was Chavis Carter in Arkansas, shooting himself in the head with an undiscovered gun while handcuffed. Six years prior, it was Oliver Neal III in Philadelphia.

I guess this fear is so palpable for black people that they feel they must fight cops for their guns. That’s what cops say Michael Brown did and what Walter Scott did. Cops are so afraid of losing their weapons to black people they resort to choking them until they suffocate like Eric Garner or slam them around in the police van until their spine breaks like Freddie Gray.

The other pattern I’ve noticed is that when black people die in police custody, marijuana always seems to be involved. Oliver Neal III was arrested when cops “found drugs in his pocket,” but somehow missed the gun he was carrying. Chavis Carter’s urine test “returned a positive result for marijuana.” Jesus Huerta had a juvenile record for “misdemeanor possession of cannabis.” Victor White had “marijuana in his pocket,” but again, cops never found his gun. Michael Brown was so allegedly high on pot he was “a demon.” Eric Garner was out on bail for marijuana possession. Freddie Gray was a seller of marijuana. (Apparently police were unable to find any connection between Walter Scott and marijuana.)

Bringing up the deceased’s positive toxicology test for or previous conviction for marijuana is a classic media move by the police to discredit the victims of their abuse, and it’s happening now with Sandra Bland. “Looking at the autopsy results and toxicology, it appears she swallowed a large quantity of marijuana or smoked it in the jail,” according to the Waller County District Attorney Elton Mathis. Somehow she was booked, frisked, and searched, but cops never found this large quantity of marijuana on her person? Maybe she had formed it in the shape of a gun.

Discovering someone with marijuana on their person or in their system is not a reliable indicator of their criminal nature or suicidal state. According to the latest Gallup poll, 1 in 9 Americans over the age of 18 are current marijuana smokers. In Sandra Bland’s age group, the number is close to 1 in 5.

Some will blame the victim. Why didn’t she just put her cigarette out? Why didn’t she just get out of the car when told? Why wasn’t she just meek and subservient, let the officer violate her rights, and work it out in court later? Sometimes these victim-blamers are the same sort of people who vigorously defend their Second Amendment rights in case they need weapons to fight back against a tyrannical government, but cannot recognize that tyranny when it’s exercised against black citizens.

Maybe Sandra Bland didn’t want to exit her car because she was aware of the two separate incidents in Texas in 2013 where troopers finger-searched the anuses and vaginas of women for marijuana and drugs, finding none, and didn’t change latex gloves between the searches. But Texas made that illegal without a warrant (Fourth Amendment notwithstanding) in 2015 and, of course, no Texas cops would violate the law. (At least she wasn’t in neighboring New Mexico, where you get digital penetration, enemas, x-rays, and colonoscopies if cops suspect you’re hiding drugs in your person.)

#BlackLivesMatter is the hashtag social media campaign that has become necessary because the war on drugs has decimated the black community, concentrated crime in their neighborhoods, and set police up in an “us against them” gangster mentality. Ending the war on drugs won’t immediately heal America’s original sin, but it is the first necessary step in halting the infection.