The Oregon chapter of the prohibitionist group Smart Approaches to Marijuana (SAM) claimed that “their [sic] is no such thing as ‘Medical’ Marijuana” in a March 25th Facebook post, insulting all of the patients that legitimately use marijuana as medicine. There are a few false statements in the Facebook posts, which isn’t surprising since cannabis prohibition is based upon lies, but denigrating medical patients is the most offensive and egregious portion of the post. This isn’t the first time Oregon medical marijuana patients have been insulted, but let’s hope that the days of ridiculing sick and disabled patients are dwindling.

Many prohibitionists ridicule the number of patients that use cannabis to treat pain, ignoring that some patients may be allergic to painkillers, that many patients want to reduce or avoid the use of lethal narcotics, and that painkiller deaths have been reduced in medical marijuana states. (They also ignore that suicide rates decrease in medical marijuana states, they have an agenda against a policy that is literally saving lives.)  You would think that even the most ardent prohibitionist would have more sympathy for patients that have cancer, HIV/AIDS, cachexia and epileptic seizures; but not SAM Oregon.

Many prohibitionists, like those in SAM Oregon, dismiss the more than 70,000 Oregon medical marijuana patients with severe pain, not caring about why those patients may choose cannabis over OxyContin, so we can set those aside for not. Patients in Oregon can apply for state Oregon Medical Marijuana Program (OMMP) cards for a variety of conditions, and many patients have multiple conditions. At the beginning of the year, more than 4,400 Oregon patients qualified for the OMMP due to their cancer diagnosis; more than 760 listed HIV/AIDS; over 1,100 for cachexia (a wasting syndrome) and more than 2,000 for seizures.

Anyone that knows anything about cannabis knows that it can reduce nausea, stimulate the appetite (the so-called munchies) and can alleviate pain. Most people, with any kind of a heart anyway, wouldn’t disparage cancer patients from using medical marijuana when undergoing chemotherapy. It baffles the mind that some would dismiss the medical use HIV patients who found that cannabis “effectively relieved chronic neuropathic pain from HIV-related peripheral neuropathy.” SAM Oregon doesn’t shy away from disparaging the medical marijuana use of cancer and HIV/AIDS patients, and that is a shameful position to have, even for prohibitionists. We hope they evolve, as many have on the issue, and apologize.

The offensive Facebook post (sincere thanks to the good folks over at the Oregon Marijuana Policy Initiative for standing up for patients and calling out SAM Oregon): 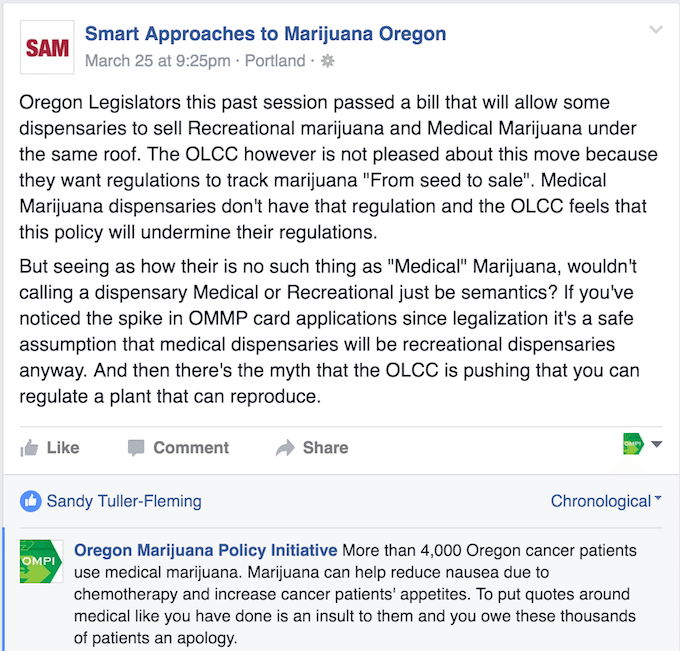