The Oregon Marijuana Business Conference (OMBC) returns to Ashland on November 19th at an important time for the cannabis industry, as there have been many changes to the state’s medical and adult use laws. The OMBC will have those in the industry, or thinking of joining the industry, prepared for whatever cannabis business license they choose, while providing a fun, engaging event that will allow for tremendous networking opportunities. You can check out the OMBC’s schedule here.

Full disclosure, I help organize the conference and its content, so I may be biased, but I, and everyone at the OMBC, take the job very seriously. We understand that we are asking many small farmers and business owners to part with their hard-earned cash, so we want to make sure that they get their money’s worth. We are activists first and foremost and we want to see mom-and-pops thrive and patients getting safe access to their medicine. The OMBC is an informational event, but it also is a venue for advocates to organize, share ideas, and work towards protecting and improving Oregon’s marijuana laws.

The OMBC kicks off with the Guru of Ganja, Ed Rosenthal, a longtime cannabis expert and activist who always speaks his mind. Not all of us will necessarily agree with all of the political positions of Mr. Rosenthal, but you have to respect the man’s passion and knowledge. Growers should really take advantage of the opportunity to pick the brain of such a legendary cannabis cultivator. The Guru of Ganja will be followed by Oregon Liquor Control Commission (OLCC) Chair Rob Patridge, the man leading the regulatory body given the huge task of starting the state’s licensed and regulated commercial cannabis system. If you want to know why the OLCC has made some of their decisions or share your perspective about the state’s regulations, the OMBC is the place to do it.

After the two opening speakers, the OMBC will delve into the basics of licensing, reporting, tracking, testing, labeling, and packaging; basically everything folks will need to know to be a medical or recreational cannabis entrepreneur in the Beaver State. Each panel will feature experts and attorneys, providing attendees the chance to get some answers to their burning questions. There are some important elections on the November ballot, as cities and counties across the state will determine whether they ban cannabis businesses, so it is only fitting that the OMBC include a panel that focuses on local regulations.

The cannabis community will be in for a treat at the conclusion of the conference when the one-and-only Tommy Chong will be on hand with Celebstoner’s Steve Bloom for an exclusive celebrity interview covering his life and career. Saturday night, OMBC attendees will be able to network and unwind with an exclusive concert performance by hip-hop legend Del the Funky Homosapien.

With so many changes to Oregon’s marijuana laws, tickets will go fast. Get your tickets before early bird pricing end November 2nd. 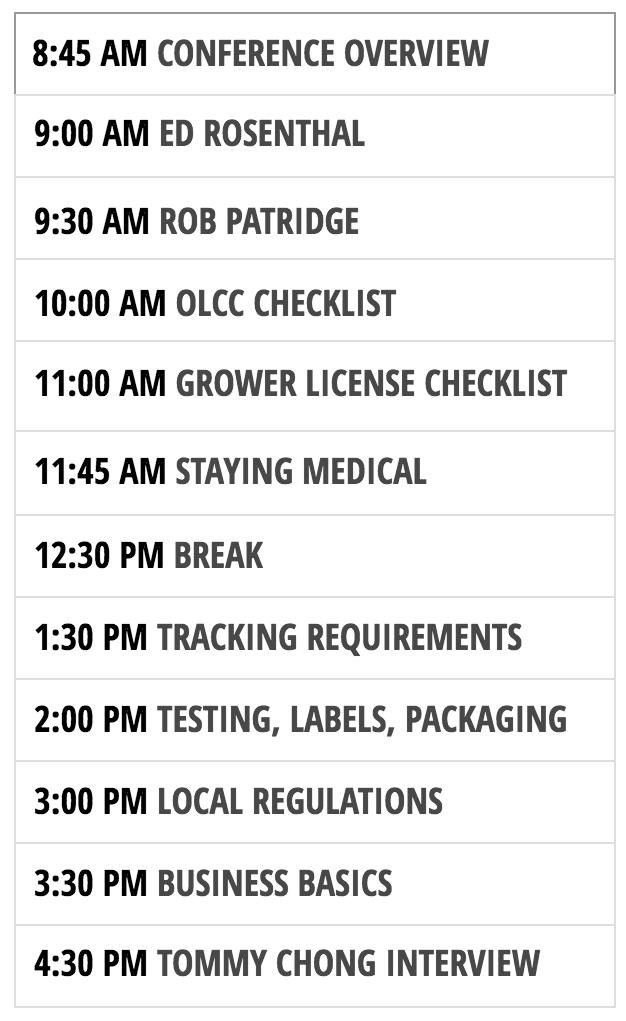