My Last Day As An Oregon Marijuana Criminal

It’s Tuesday, June 30, which means when the clock strikes midnight, Oregon marijuana prohibition is over. The legalization we passed last November as Measure 91 takes effect on Wednesday, July 1.

It’s going to be a busy day for me. I have plenty of local and national media interviews to respond to today, including a press conference at ACLU of Oregon headquarters, a sit-down with a reporter from the HBO series “VICE”, and an appearance on “Who’s the Ross?”, a local late-night comedy program.

Most of the media inquiries are regarding our planned celebration tonight on the Burnside Bridge (#BurnsideBurn), the central point in Portland that defines our east-west and north-south borders. The spot is perfect for a post-legalization selfie with the iconic neon “Portland Oregon” sign in the background. 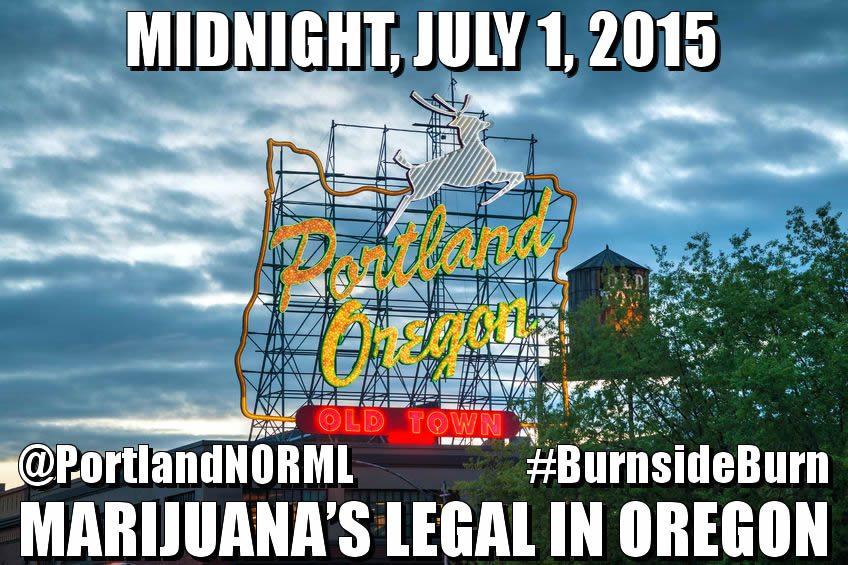 Our new legalization law allows adults over 21 to share marijuana and plants with one another, so long as there is no consideration (sales, barter, trade, promises, anything) for the exchange. So we’ve encouraged those adults who have an ounce or less to bring it and share with others. We’ve also encouraged medical marijuana patients to bring marijuana to share; they are still allowed to possess up to a pound and a half of usable marijuana.

Consuming marijuana in public, however, is still illegal and subject to a ticket from police. While we’re not encouraging anyone to break the law, I won’t be surprised if some people do.

This is our way of solving what our legislators referred to as the “immaculate conception” problem: marijuana becomes legal on July 1, but there is no legal outlet yet for anyone to purchase it. Thus, our legalization incentivizes a) buying marijuana from the black market, b) getting a medical marijuana cardholding friend to divert marijuana from a dispensary, or c) driving across the river to Vancouver, Washington’s, legal pot shops and violating federal law bringing it across the border.

Our legislature is currently working on some bills to address “immaculate conception”. One bill would open up the existing medical marijuana dispensaries to all adults starting October 1. Adults would be barred from purchasing edibles, tinctures, and extracts, though, and would be limited to purchases of just one quarter ounce per day. The good news is that Measure 91, our legalization initiative, doesn’t authorize the taxation of marijuana until January 4, 2016, giving us three months of tax-free marijuana sales.

Another couple of bills the legislature has cooked up would address the tax issue. One would set a temporary recreational-only tax at the medical marijuana dispensaries of 25 percent starting January 4, 2016, and ending December 31, 2016. Another bill would set the permanent sales tax at recreational stores, expected to open in late summer 2016, at 17 percent for the state and up to 3 percent local sales tax if approved by voters.

While I’m thrilled that I will go to sleep tonight in my own bed no longer a criminal in my home state, there is still much work yet to be done. We are just experiencing the end of our Civil War over marijuana and now we begin our Reconstruction. Just like those early days of emancipation, we are about to experience our Jim Crow phase of marijuana.

So I’m excited for legalization night, but I’m not finished with legalization. Not until we have the same rights as beer drinkers and cigar smokers in all fifty states.