As Bernie Sanders approaches the New Hampshire Democratic Primary tomorrow night, he leads by almost 15 points in Huffington Post’s Pollster poll averages. Hillary Clinton barely eked out a 0.2 percent “win” in Iowa and now the Granite State could put Senator Sanders in the position of frontrunner for the Democratic presidential nomination. 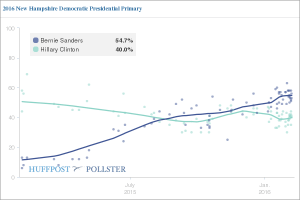 This has led to a collective panic on the part of the Clinton campaign, her associated SuperPACs, and the very foundations of Wall Street.

“It has the potential to personalize it, it has the potential to be a dangerous moment. Not just for Wall Street not just for the people who are particularly targeted but for anybody who is a little bit out of line,” Blankfein said. “It’s a liability to say I’m going to compromise I’m going to get one millimeter off the extreme position I have and if you do you have to back track and swear to people that you’ll never compromise. It’s just incredible. It’s a moment in history.”

Blankfein is clearly worried that the people, through Sanders’ campaign, are waking up to who the real culprits are when the Obama economy posts record Wall Street numbers while Main Street’s still crushed by student debt and stagnant wages.

Meanwhile, Hillary’s husband, President Bill Clinton, this weekend struck out at Senator Sanders as well for continuing to press the point that Hillary’s top five career donors are the big financiers she claims she’ll rein in:

“ ‘Anybody that doesn’t agree with me is a tool of the establishment,’ ” Mr. Clinton said, mocking what he described as the central critique of Mrs. Clinton by Mr. Sanders.

But then Bill Clinton pivoted to a new strategy to try to rescue Hillary’s flailing campaign: painting the supporters of Bernie Sanders as evil sexist trolls.

“She and other people who have gone online to defend Hillary, to explain why they supported her, have been subject to vicious trolling and attacks that are literally too profane often, not to mention sexist, to repeat.” Mr. Clinton, growing more demonstrative, added that the liberal journalist Joan Walsh had faced what he called “unbelievable personal attacks” for writing positively about Mrs. Clinton.

This is clearly a new strategy, as David Brock, one of the Clinton SuperPAC coordinators, talked to POLITICO about how Millennials are overwhelmingly in favor of Senator Sanders, taking time to blame the evil sexist trolls.

“If you study what’s being said in social media, the media that millennials are consuming, it is filled with misinformation and vicious lies and sexism in terms that you can’t even repeat from his supporters, from other trolls,” Brock said. “And you wonder why there’s such a gap in the millennial preference for Sanders over Hillary. I think if people took a look at what they’re seeing, that would account for some of [the deficit] — the fact that they have a misimpression of her.”

I live online, so I won’t for one second disagree that there are some evil, vicious, hateful trolls online. I keep a special log of some of the things they write about me.

But the other thing there’s an abundance of online is data. Young people today don’t take your word for anything; they can look it up on the phones, tablets, and desktops. They don’t argue at length, like my generation did, about who was that one guy who played in that one movie – they look it up on IMDb. They don’t guess about what percentage of the popular vote Bill Clinton won in 1992 – they look it up on Wikipedia (43 percent).

It’s quite telling to me that David Brock believes that if only the Millennials were getting their news from the old, respected, owned-by-six-major-corporations establishment media, they’d like Hillary Clinton much more than they do and they’d see through Bernie Sanders’ empty promises.

It seems to me like Millennials break much more for Sanders because of their access to decades of data and record on Mrs. Clinton and Mr. Sanders. They can look it up for themselves and see that when she was a Goldwater Girl, he was marching for civil rights. They can compare their past positions and their present positions and find that Bernie’s rarely wavered on his issues, while Hillary’s had to “evolve” on many of hers, like only supporting gay marriage in 2013, when it was already a fait accompli. It is only natural that a large majority of young voters, who overwhelmingly support marijuana legalization, would support Bernie Sanders, the candidate that has sponsored a bill that would end federal cannabis prohibition.

But the biggest problem with the attack line about the trolls is that in 2008, Hillary lost to an unknown senator smeared as a “socialist” whose name began with a “B”. At the time, he had amassed a record number of individual donations and mobilized an amazing online presence that blew past Hillary’s campaign and secured the Democratic nomination.

I was hosting a political talk radio show at the time on XM Satellite. The trolls then weren’t evil sexist trolls, they were evil racist trolls, and they spewed forth bile every bit as repugnant and more so than what Hillary Clinton has endured thus far. If Brock wants “misinformation and vicious lies”, look no further than the “birthers”, the Rev. Wright attacks, and Obama as a Muslim Manchurian Candidate (yes, somehow an evil Muslim and a black separatist Christian simultaneously).