When we caught up with Mary Jean Dunsdon, aka Watermelon, life was getting back to normal for her after her annual BudBQ event that she hosts at her home every summer. You can see Watermelon, and many other talented cannabis entrepreneurs and activists at the International Cannabis Business Conference in Vancouver, British Columbia, Canada, October 13-14.

ICBC: Thanks for sitting down with us! The ICBC is only two months away and we’re excited to have you!

MJD: Thanks, I can’t wait! The cannabis community in Vancouver is just incredible and I love the networking that’s going to be happening. Being around all the people, old friends and new friends, sharing ideas and talking about cannabis. I’m such a social creature, I just love being in the friendly fire!

First off, I have to ask, how did you get the name Watermelon?

MJD: From selling watermelon on Wreck Beach! (west Vancouver’s storied nude beach.) I started selling watermelon to adults, and I gave all children free slices. For 22 years I did that – and people tend to call you what you sell. The story goes even deeper, because then I was going to be a stand-up comic. My friend was an 80-year-old Irish bootlegger and we went to Los Angeles to become movie stars. We had a comedy routine, and he wanted me to either be “Flossy” or “Bubbles”. I didn’t like either of those names and suggested it be the “Paddy and Watermelon Show” and I have been Watermelon ever since. 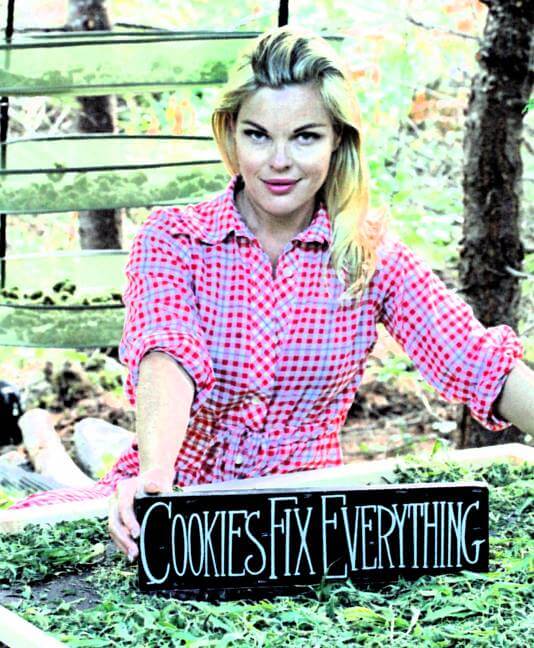 ICBC: And last year you retired from the Wreck Beach gig?

MJD: That’s right. One of the local news headlines said “Watermelon Hangs up Her Birthday Suit”. I felt I needed to close that chapter and move onto other things. But it was a pretty good chapter! Wreck Beach is such an amazing place. I call it the last frontier of inner-city freedom. In what other city, within minutes, can you be in the most serene, beautiful, natural place? You can be naked, swimming with seals, the eagles are floating overhead, and within 20 minutes you can be back in the hustle and bustle of the big city.

ICBC: You made headlines by getting arrested on Wreck Beach for selling edibles. How did that all go down?

MJD: Three times! I was arrested three times for illegal trafficking of gingersnap cookies! laughs I knew the cop – we called him Napoleon because he was this short French guy, and he’d come to Wreck Beach to conquer. I’d see him on the beach and we’d talk about our Volkswagen vans. Then one day I offered him a non-infused cookie and I think that incensed him and a couple days later he arrested me. I know that the cops there have a job to do but seriously, did they need to arrest the cookie girl? laughs

Anyway he arrested me on the far end of the beach and had to parade me across the entire beach to get me out of there. So there I am, walking by all these people and families who had known me for 8 years and they’re standing up – like 200 people – standing up and shouting at the cop, shaking their fists, bringing their kids up to kiss me on the cheek as he’s leading me away. It was like Charles Dickens, man!

ICBC: That’s incredible! Did you get convicted?

MJD: No! I was acquitted! Out of three arrests, I had three provincial trials and I was acquitted three times. In hockey we call that a hat trick! laughs They wanted to stick it to the cookie girl but I didn’t balk. I wanted the cop, the judge and the crown prosecutor to look me in the face and make me a criminal for selling gingersnap cookies. A plea bargain would have made me a criminal and I refused to take it. Come to find out, the law is perforated with flaws and it’s harder to convict that you would think.

Oh and then came the headlines. Really I couldn’t have hoped for better branding. “Cops Bust Cookie Girl for Pot on Nude Beach” is a story every outlet in Canada wants to cover. So now I’m nationally branded and selling more fuckin’ pot cookies than ever! laughs

ICBC: How did that experience change you?

MJD: Getting arrested might have been the best day of my life. Before being arrested I was kind of a naive young girl. But suddenly I see my community stand up for me. They had my back. People even sent money to my lawyer to help me out saying “Keep fighting the good fight, Watermelon.” So they all had my back and it gave me the courage to stand my ground. I decided my arrest wasn’t going to make me feel like a bad person in my community. I felt this fuckin’ tsunami of support from the people around me and that emboldened me to not be afraid and that’s served me well in my other ventures.

ICBC: And you have many ventures! You run a bakery, own a candy store, do stand-up comedy, host a cooking show.

MJD: I’ve been around awhile! That’s right, I have a store in Vancouver’s West End called Commercial Drive Licorice Parlour. We celebrate four years in October. I run a marijuana wholesale baking business where I sell my cookies and other infused goodies. Occasionally I emcee events (like the International Cannabis Business Conference coming up October 13-14), although I don’t do much stand-up comedy these days. And of course the cooking show. 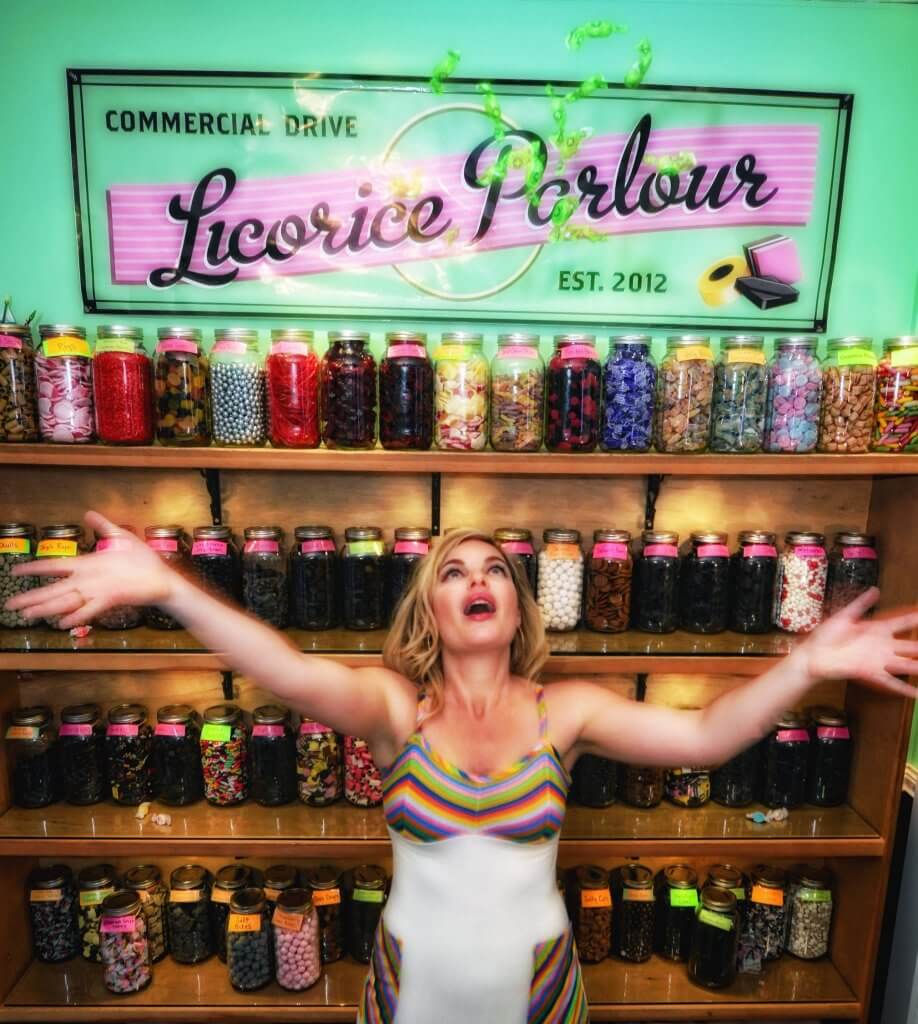 ICBC: How did the cooking show get started?

MJD: I produced my first cannabis cooking show in 2002. Of course, I’m the cookie girl from the headlines and everybody wants to ask me how to cook with cannabis. So I shoot my first cooking show, called “High Times presents Baked and Baking”. It was the the only marijuana show in existence at that time that I was aware of.

MJD: That’s right. We brought back the show in 2008 with a series of Youtube videos. My goal was to spread the responsible use of edibles. A lot of people get scared off by edibles because they eat too much and have a bad experience. My motto is “less is more” and I talk about that on my shows and demonstrate how to measure doses and control the experience.

Now I’m in the middle of releasing a new series called “Baked” through Potent Media. They’re incredibly well done and beautiful and we take the art of cannabis cooking to a new level.

ICBC: Your early cooking shows featured your lovely mom,  Mary Elizabeth, as sous chef. In one clip she explained how she used to think, like many in her generation, that marijuana was dangerous, and the providence of gangsters. What made her come around?

MJD: This is a testament to how good propaganda is. For years people clinged to propaganda that’s based in false facts. “Marijuana is terrifying! It’s the enemy of the children!” Isn’t that insane? Of all things, cannabis! Not tobacco, not alcohol, unsafe sex, bad diet or a lack of sunshine. But that marijuana might be the end of your lovely child. But now it’s incredible seeing people of her generation come around, because their kids are involved with it, and it is becoming legal. It’s a testament to their love and appreciation for us that they can get past that stigma.

All along I’ve been really open with my mom about making pot cookies. In fact my gingersnap recipe is my mother’s!

ICBC: I hear your wholesale baking business is killing it these days. Now that Canada is considering full legalization of recreational marijuana, how are you eyeing the potentially expanded market?

MJD: I’ve been ready and waiting for years! I’ve had a marijuana bakery since 1992! That’s how long I’ve been around. So I’m not as worried about what’s going on with new legislation. I’m a tortoise – slow and steady. I’ve been around for 20 years and I’ll be around for another 20 years. Unless we go the way of the Philippines, I’ll still be here.

These days the industry is like the wild west. People are opening cannabis businesses, blowing through money. But I’m different. I’ve been here. I have a great staff and we’re not going anywhere. At one point Vancouver City Council outlawed edibles for awhile. They saw them as problematic and all the dispensaries stopped. So it’s a moving target. But I’m diversified and I’m doing what it takes to keep my girls employed. But people know me, they know my products, and that kind of keeps me immune from the rollercoaster. I’ll stay the course and diversify a million times. I’m not going anywhere.

ICBC: What do you think the Canadian cannabis industry will look like in 10 years?

MJD: Just like the wine industry. Look at the Vintner’s Association. They’ve got rules in place around quality and origin, and those kinds of things matter to the wine drinker. I think marijuana is going to be handled the same way. Just like you can get a $5 bottle of wine or a $500 bottle of wine, there will be Walmart weed and there will be the highest quality, boutique cannabis. That’s coming. People will love certain farms, certain vintages, just like I love a bottle of California Cabernet. The good stuff will rise to the top and I say, may the best grower win. And that’s not me, by the way! I have a succulent in the kitchen I can barely keep alive. laughs My work is in the kitchen.

ICBC: In two months you’ll be emceeing the International Cannabis Business Conference in Vancouver. How did you get connected with ICBC?

MJD: You know, I met (ICBC executive producer) Alex Rogers back in the day. In 2000 I was on the cover of High Times (for the first of many times!) and they flew me to Amsterdam to be part of the Cannabis Cup. That’s where I first met Alex. You know, that’s the thing about cannabis, is that it’s really a small core of people in the business and activist community. The most effective activists are the ones that have been around the longest and we all stick together.

ICBC: Mary Jean, thank you so much for taking time to talk with us – we’re so excited for the ICBC and can’t wait to see you there!

MJD: Thanks! Farewell, and I’ll see you in October! 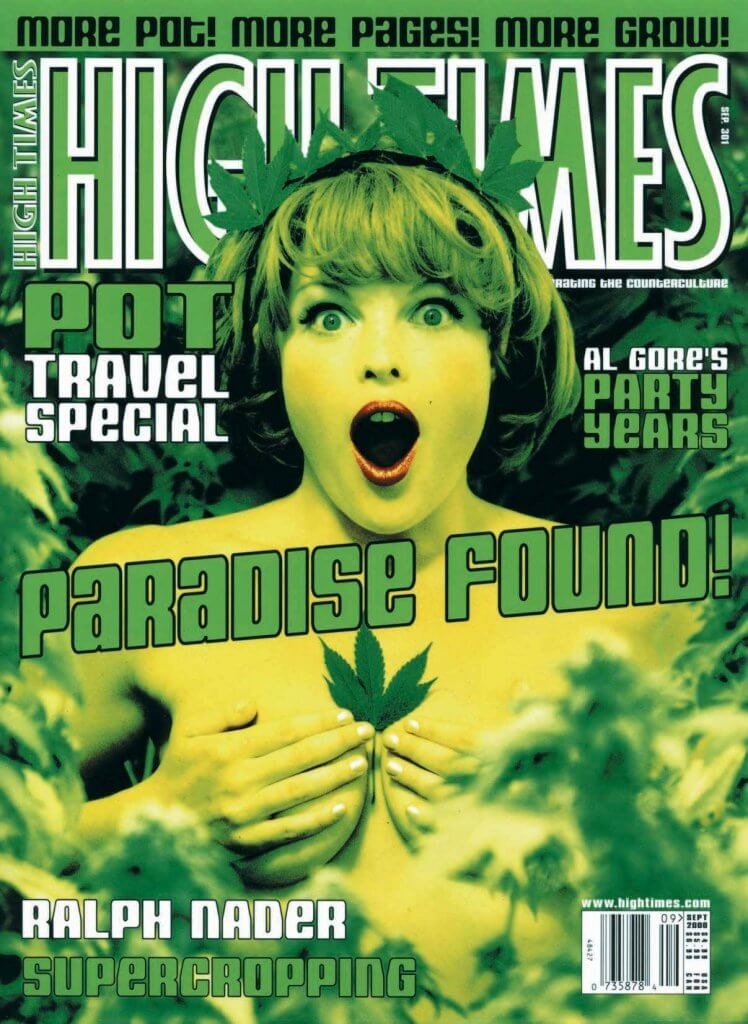 The International Cannabis Business Conference (ICBC) returns to San Francisco, California, on February 13th-14th, bringing in marijuana industry experts from around the globe to create an educational and networking event unlike any other. The two-day ICBC experience includes the latest business, legal and political information while also providing networking social events that will benefit any entrepreneur. With California on the verge of legalizing cannabis in 2016, all eyes will be on the Golden State as the legal cannabis industry will be poised to fully enter the eighth largest economic market in the world. Whether you are a grower, processor, dispensary operator, own an ancillary business or are just thinking about entering the cannabis industry, you will find the ICBC engaging and entertaining and leave with valuable knowledge to take your respective business to the next level. Attendees will learn from those with success on the ground in both commerce and activism, learning important business tools as well as how to best improve and protect our marijuana laws. The ICBC truly believes that the best cannabis industry promotes sound business laws while also working to keep people out of prison and ensure safe access for patients. You do not want to miss this world class cannabis business conference!