President Donald Trump and Marijuana Politics is one of the most controversial decisions he will have to make . The question is whether to continue the federal stand-down by the us Justice department in which DOJ does not enforce federal marijuana laws where they contradict state laws legalizing the legal use and sale of marijuana in the 37 states where it is currently legal in some form. Although he has a long standing personal opposition to drug use Trump has also expressed support for the medicinal use of marijuana in the states where it is legal.

Canceling the order by Obama attorney general Eric Holder to stand down on Marijuana would cause a major dislocation in multiple states that are currently budgeting millions in state revenue from the taxation of marijuana and un-employing hundreds of thousands of people currently working in an industry legalized by the states. I would urge President-Elect Trump to view this as a business man; U.S. government cannot turn back the clock on federal marijuana law enforcement.

Just over one year ago, on November 23, 2016, GQ Magazine published a video interview of Donald J. Trump while he was campaigning for POTUS.  In this interview, he was asked his opinion about legalized marijuana, to which he answered “Legalized marijuana is always a difficult question . . . for medicinal purposes, for medical purposes, absolutely, it’s fine.” 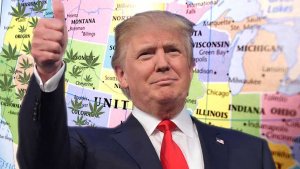 A month before, on October 29, 2015, then Candidate Trump told the Washington Post: “In terms of marijuana and legalization, I think that should be a state issue, state-by-state. Marijuana is such a big thing. I think medical should. And then I really believe we should leave it up to the states. And of course, you have Colorado. There’s a question as to how it’s all working out there, you know? That’s not going exactly trouble-free.”

While many Internet sources say that sometime in 1990, the Sarasota Herald Tribune published an article that Donald J. Trump said the War on Drugs was a joke, this researcher has found that what actually occurred was on April 14, 1990, at a Company of the Year Award luncheon, sponsored by the Sarasota Herald Tribune for their annual prize announcement, Donald J. Trump was invited to speak.  Trump said he thought the Drug Enforcement Agency efficacy was a joke, and that “we’re losing badly in the war on drugs … you have to take the profit away from these drug czars … tax revenues from a legalized drug trade could be spent to educate the public on the dangers of drugs.”  Portugal tried this model in 2001, and it is considered a great success by the Portuguese more than fifteen years later.

While Donald Trump is on record at the 2015 CPAC making a statement about recreational marijuana, “I say it’s bad.  Medical marijuana is another thing, but I think it’s bad, and I feel strongly about it.”  Donald was speaking to Conservatives, and while that might have been the reasoning behind making such a marked change of direction from his position in the 1990’s, his position on Medical Marijuana, even in the face of these same Conservatives, remains unchanged.

During the same election that won Trump the Presidency, there was another vote on the Florida ballot.  Amendment 2 passed with an overwhelming majority, with more than 71% of the States votes, on the Left and the Right, approving of Medical Marijuana.  This is a far higher percentage of the population than voted for Donald Trump, which reported by the State of Florida, stands at just over 49%.

Florida was not alone, as California, Nevada, and Massachusetts approved of recreational marijuana, and North Dakota and Arkansas passing their own Medical Marijuana provisions.

All told, twenty-eight States and Washington D.C. now have legalized Medical Marijuana.  A clear majority of States and population are for it, nationwide.

A great many pro-marijuana organizations, publications, and Internet outlets put their support behind Donald Trump based on his positive statements about Medical Marijuana.  People who have marijuana rights as their primary political issue turned to Trump, many against long time party affiliation, in hopes of greater freedom and less abuse at the hands of Federal Agencies.

If, after winning the election, Donald Trump listens to the likes of Chris Christie and Jeff Sessions he risks alienating his base and his newly won supporters in a very tangible way. Both Sessions and Christie come from ‘Old World’ War on Drugs thinking. 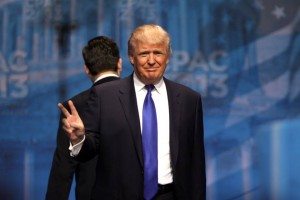 Criminalized Marijuana has directly lead to the persecution of countless individuals, the vast majority of whom are poor and minorities.  That this was the desired result of the designers of the system of criminalization cannot be reasonable doubted.

“Laws to suppress tend to strengthen what they would prohibit.  This is the fine point on which all legal professions throughout history have based their jobs security.” – Frank Herbert

“If the people let government decide what foods they eat and what medicines they take, their bodies will soon be in as sorry a state as are the souls of those who live under tyranny.”  – Thomas Jefferson

Drain the Swamp.  Limit Federal Power.  Reel-in out-of-control Alphabet Soup agencies.  Return respect for law.  These are all things Donald Trump made as major issues for his campaign platform.

“The prestige of government has undoubtedly been lowered considerably by the prohibition law. For nothing is more destructive of respect for the government and the law of the land than passing laws which cannot be enforced.” – Albert Einstein

A precipitous move by the Trump administration to change the equation on legal marijuana in the states could in fact bring action by congress where a coalition of liberal Democrats and libertarian republicans are moving towards legislation to legalize the plant.

Roger Stone is the author of the New York Times bestseller The Man Who Killed Kennedy. He is a legendary American political consultant and strategist who played a key role in the election of Republican presidents Richard Nixon, Ronald Reagan, and George H. W. Bush. He was also instrumental in the 2000 Florida recount responsible for the election of George W. Bush and the 2016 election of Donald Trump. Read his new book – The Making of the President 2016: How Donald Trump Orchestrated a Revolution.