After a ton of negative publicity and widespread anger around the handling of its last-minute “postponement” last Saturday, the organizers of Denver’s annual 420 Rally have finally reversed course and are now processing refunds to those who paid as much as $150 to attend the snowed-out event.

In an email to attendees who signed up via the event-organizing platform Eventbrite, the organizers stopped short of apologizing, but explained, somewhat patronizingly, that “sometimes things don’t work out your way, often for reasons outside of your control, but that’s life and we’re going to make the most of it.” 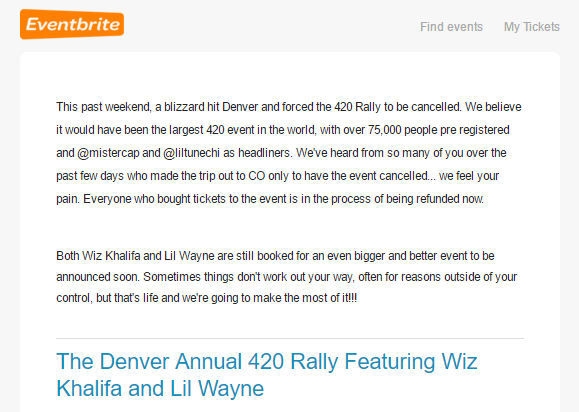 Now the organizers are planning on rescheduling to a bigger arena. In a “behind the scenes look” granted to Denver’s local ABC affiliate, “Those in charge of Denver’s 4/20 celebration met in a downtown law office Sunday to toke up over some cookies and coffee and plan the next big thing.” It’s all pie-in-the-sky stream-of-consciousness type stuff:

Determined not to let a little snow steal the show, Denver 4/20 organizers are now hashing out a plan for an even bigger celebration in June or July.

Think what you will of these guys trying to book a summer show at Red Rocks or Mile High at this juncture, but at least you’ll be getting your refund.