Last month, Democratic Congressman Earl Blumenauer published an open letter to President Barack Obama urging him to use his executive power to end marijuana prohibition. Now, Representative Blumenauer is calling upon the cannabis community and all concerned citizens to help his effort by signing onto a petition to the president. You can sign Rep. Blumenauer’s petition here.

Virtually every reasonable person, including Democratic front-runner Hillary Clinton and former Attorney General Eric Holder, understands the absurdity that marijuana is considered a Schedule I controlled substance by the federal government, the same classification as heroin. Those most knowledgeable about cannabis, including Democratic presidential candidate Bernie Sanders and former Surgeon General Joycelyn Elders, know that marijuana shouldn’t be scheduled as a controlled substance as all, treated like the government does alcohol and tobacco.

President Obama himself stated that marijuana is no more dangerous than alcohol. Unfortunately, President Obama has placed the burden upon Congress to reclassify cannabis, ignoring the power of the executive branch. President Obama’s latest proposed budget would have allow Washington, D.C., to move forward with regulated marijuana sales to all adults, but it strangely stripped away a previously passed provision prohibiting the federal government from using any funds from prosecuting medical marijuana.

I asked Rep. Blumenauer about the president’s proposed budget and the need to ensure that state-regulated medical marijuana patients and providers were protected from federal persecution. Congressmen Blumenauer responded, “The federal government shouldn’t be arresting or prosecuting people for using or providing medical marijuana in states where it is legal. Over the past two years a bipartisan majority of the House has voted to prevent the Justice Department from interfering with state medical marijuana laws. I plan to make sure once again this year Congress votes to put a stop to wasting its time and money.”

Congressman Blumenauer has clearly been on the right side of history on cannabis and he has done a great job putting together bipartisan support for this effort and other needed cannabis law reforms. I am honored to vote for Rep. Blumenauer and can attest to his thoughtfulness and dedication to legalizing and regulating cannabis. However, Rep. Blumenauer can only do so much and he needs the American people to join him and call upon President Obama to utilize his executive authority and stop the failed and harmful policy of marijuana prohibition.

Please add your name to this important effort and consider chipping in a donation to help Rep. Blumenauer continue to move our nation toward a sane and sensible marijuana policy. 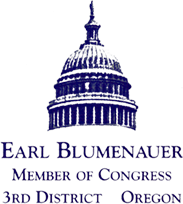 It is time, Mr. President, for you to take the next logical step, cementing your legacy in history on drug reform and a fairer criminal justice system. Call for an end to marijuana prohibition and de-schedule marijuana. The House and Senate are reluctant to take bold action to legalize marijuana at the federal level, but you don’t have to wait. Under your leadership by de-scheduling marijuana, you will trigger monumental reform, allowing states to continue their pioneering efforts and putting pressure on Congress to take additional actions to tax and regulate. We can start by ending the lunacy of forcing legal marijuana companies to operate as cash-only. Seldom has such a small step, supported by a majority of Americans, had such potential transformational power.

The time is now. The country is ready.

In 2008, I joined with tens of thousands of Oregonians who cheered you on chanting, “Yes, we can!”

Today, I speak on behalf of millions of Americans across the country and ask you to support ending the prohibition of marijuana.

We hope you will respond, “Yes, I will.”