As you recover from your various holiday celebrations with family and friends, maybe you want to unwind with a new movie that appeals to the cannabis community. Maybe you’ve already seen the new Star Wars (I loved it by the way, very much in line with the feel and story of the originals, before we ever had the unfortunate knowledge of Jar Jar Binks) and like me, just can’t find the time right now to make it to the theatre to see Quentin Tarantino’s The Hateful Eight; then Celebstoner, has you covered.

Celebstoner’s Steve Bloom has covered all things cannabis culture better and longer than just about anybody, so I always look forward to his year-end lists. And I’m really looking forward to his celebrity on-stage interview of Tommy Chong at the upcoming ICBC.  I only managed to watch the #1 and #5 movies on his list this year:

Jesse Eisenberg and Kristen Stewart teamed up again (they were previously in Adventureland) for this action-comedy directed by Nima Nourizadeh (Project X). Eisenberg’s Mike works at a convenience store, but little does he know that he’s been programmed by the CIA to be a killer. When the CIA decides to put him out of commission, Mike’s special powers (aided by plenty of marijuana inhalation) work to his advantage. Stewart’s terrific as his loyal stoner girlfriend. Watch the trailer here. 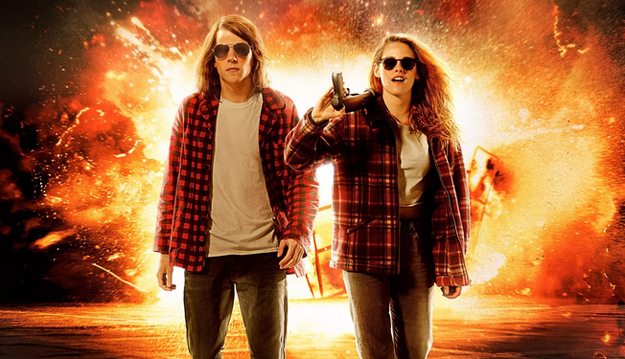 After several years on Comedy Central, Amy Schumer made a bold leap to the big screen in Judd Apatow’s romantic comedy. Playing herself, Schumer is single and not looking to commit until she meets sports doc Aaron (former SNL star Bill Hader). The traditional roles reverse – Amy likes to smoke pot and Aaron doesn’t. She sneaks a toke here and there and, in the film’s climactic scene, is chided by Aaron after taking a one-hit break. Their romance isn’t very compelling, but Schumer is in her movie debut.

Personally, I loved both of these movies. I found American Ultra to be a very fun movie experience with enough action, grittiness and unexpectedness to keep me very entertained. If you like movies like Pineapple Express or even the Kingsman, I think you’ll enjoy American Ultra. Trainwreck was hilarious and had me literally crying at one point from laughing so hard. My one personal quibble with the movie is below, since it is a bit of a spoiler. I definitely want to check out #2, Sicario, that he compares to the Traffic, and I’ve heard good things about. Be sure to check out Bloom’s entire list, and here’s to an even better 2016 politically, culturally and artistically for the cannabis community.

SPOILER ALERT!  Personally, I wasn’t sold on the notion that  the Trainwreck protagonist played by Amy Schumer would give up both alcohol and cannabis completely cold turkey. This just felt a bit forced, especially knowing Schumer’s real-life lifestyle. The movie takes inspiration from Schumer’s experiences and it would have been more realistic, in my opinion, if she had made a decision to choose moderation. I understand that some people can make this type of decision, and don’t criticize anyone who feels that this is the best decision for them, but it just didn’t quite feel right in this movie to me. But it is a small quibble and I recommend the movie.