Chicago Mayor Rahm Emanuel, a Hillary Clinton supporter, has become so toxic that he has had to stay away from the Democratic front-runner while Bernie Sanders has run anti-Emanuel ads tying Clinton and the embattled mayor together. Mayor Emanuel has come under fire particularly for the police shooting of Laquan McDonald and the closing of many public schools. Now, black Chicago activists are flying banners on Super Tuesday that state “Chicago Stands with Laquan, Hillary Stands with Rahm— #ByeAnita #ByeRahm” across the city’s skyline.

I want to thank Rahm Emanuel for not endorsing me. I don’t want the endorsement of a mayor shutting down schools and firing teachers. 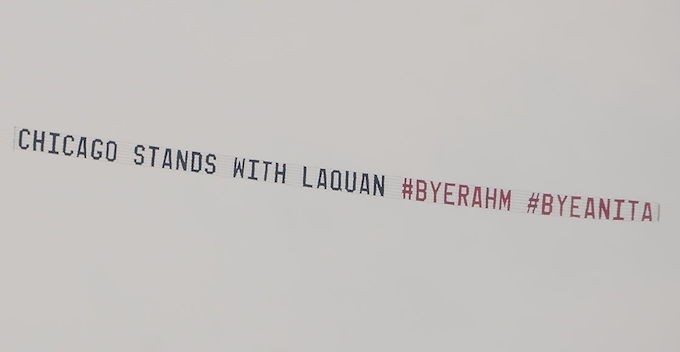 Assata’s Daughters, an activist group consisting of black women in Chicago sponsored the flyover, on the day that Chicagoans will be casting influential votes in the Illinois primary that has seen Bernie Sanders drastically close the gap in Hillary Clinton’s birth-state. There has been much speculation as to whether Clinton’s ties to Emanuel would ultimately benefit the anti-establishment Sanders. 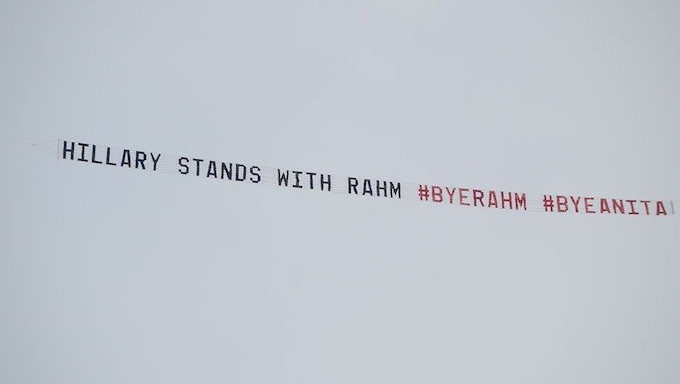 In a statement announcing the banner flyover, Tess Raser, an organizer for Assata’s Daughters demonstrated deep feelings of anger at Mayor Emanuel, Hillary Clinton and Illinois State’s Attorney Anita Alvarez. Tess Raser condemned Chicago’s mayor as “anti-black” and Clinton and Alvarez as complicit in his actions, stating, “To this day, Hillary Clinton has yet to condemn Chicago’s anti-black mayor. Mayor Emanuel has conspired with State’s Attorney Alvarez during his own re-election campaign to cover up the police murder of Laquan McDonald —a life that to Emmanuel, Alvarez, and Clinton did not matter.  Any politician who supports Emanuel should consider themselves implicated in his misconduct. Anti-black politicians are not welcome in Chicago whether they are running for State’s Attorney or President of The United States.” 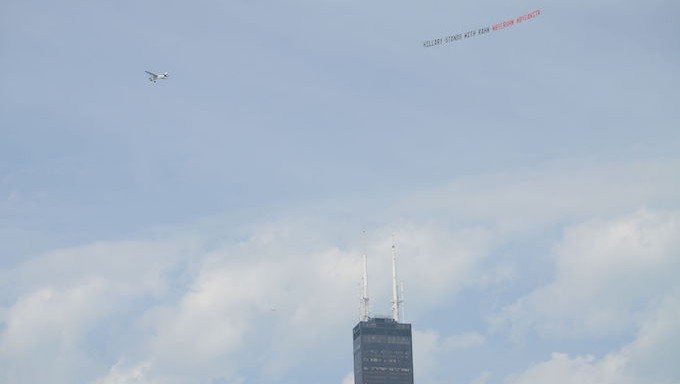 Mayor Emanuel has seen his approval ratings plummet down to 27% as he has been accused of covering up a video showing Chicago police officer Jason Van Dyke shoot 17 year-old Laquan McDonald 16 times in 13 seconds. Video of the shooting was captured by a police cruiser’s dash cam, but wasn’t released for 13 months after the shooting.

The shooting of McDonald occurred just four months before a Mayor Emanuel faced reelection, where he ultimately defeated Jesus “Chuy” Garcia, who has appeared in a recent ad supporting the anti-establishment Bernie Sanders. Many feel that Mayor Emanuel’s reelection chances would have been harmed by the release of the video, so he decided to bury the video as much as possible.

Criminal justice reform has been a major political issue, in our society and during the Democratic presidential campaign. The shocking number of occurrences of police shootings has captured the nation’s attention and civil rights and civil liberties activists are demanding real change to address this serious issue.

After the polls close, it will be interesting to see how Hillary Clinton ultimately fares in the polls, particularly among Chicago’s black voters. Clinton has relied upon black support as one of the foundations of her candidacy, but that support has been tested by Senator Sanders and Chicago civil rights activists. Whether Chicago and Illinois residents #FeelTheBern, it is apparent that public support for Rahm Emanuel won’t return anytime soon.