Bern One: Dispatch from the Colorado Caucus on Super Tuesday

Colorado Berned one tonight. The results are still coming in, but his lead is so strong that the networks were calling it for him as we were walking out of the caucus location, Byers Middle School, just west of ritzy Washington Park. The energy tonight was palpable, and the Sanders electorate impossible to miss. Each precinct was put into separate rooms for the caucus process and, in our room, Berners outnumbered the Clinton camp 2-to-1. 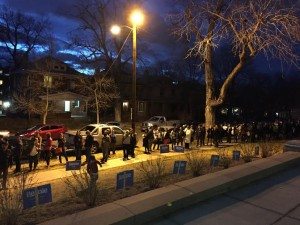 A Michael Bennet staffer who was acting as the local press liaison told me that officials had expected about 1,200 voters, but turnout was easily twice that. Reports of overwhelmed caucus locations were reported throughout the night. One twitter user in Fort Collins reported that the building her precinct was using had been cleared by the fire marshal:

Fire marshall kicked us out and in true Colorado fashion we are caucusing in the outdoors. #FortCollins pic.twitter.com/Di8OA54sbl

The scene inside Byers was one of gleeful chaos. Everybody knew that Trump had basically swept the South, and there seemed to be a common understanding that–despite the scaremongering–nothing could be better for either of our candidates. The caucus was scheduled to begin at 7:00, but by 6:45 the line was some four to five blocks deep, and officials promised that anybody in line by 7:00 would be admitted (“So as not to disenfranchise anybody!” said one captain to applause and cheers). As time wore on, frustrations became more evident. Several alpha-types got a little loud about it, but no real drama arose. 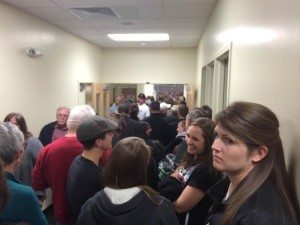 We were assigned a room sans leader, and a small group of us were left to figure it out as we went until, about 20 minutes in, a group of 60 or so additional people poured in. They had apparently been forgotten and then rescued. After a brief rundown by the big boss at caucus, we were left again, 60 folks heavier, and stumbled our way through the process. It was raw, clumsy, grassroots democracy at its best with strong-willed, respectful, and pragmatic participants.

Marijuana Politics’ blogger-in-chief, Anthony Johnson, wrote previously that recent polling in Colorado looked good for Bernie Sanders. And you know what? The results speak for themselves as Colorado was one of the four Super Tuesday states that went for the anti-establishment candidate, helping keep Bernie Sanders’ campaign alive.

Our precinct? We went 93-42 Bernie, giving him a delegate count of five. Hillary walked away with two.