Yesterday, I tried to shred the framing around drinking alcohol that portrays it as somehow different and separate from “doing drugs”. Today, let’s think about the concept of “hard drugs” vs. “soft drugs” and understand where exactly alcohol fits in that dichotomy.

To most people, marijuana is considered a “soft drug”. This is a concept that arose in the Netherlands as they set up their famous “coffee shop model” for soft drug distribution. As the Dutch government puts it:

The Netherlands tolerates the sale of soft drugs in coffee shops and takes rigorous action to suppress the sale of hard drugs. By adopting this strategy, the government separates these two markets. Cannabis users are not obliged to buy their soft drugs from criminal dealers who might easily bring them into contact with hard drugs.

This is fairly well understood in America, too. Marijuana, caffeine, and perhaps magic mushrooms are considered “soft drugs” and heroin, meth, cocaine, PCP, LSD, ecstasy and others are considered “hard drugs”, because they are far more dangerous to one’s health. But how can we better define “danger to health” and how would those definitions place alcohol in the mix?

Death: If a drug can kill you immediately from its use, that should be an automatic qualifier for the “hard drugs” label. Yes, cigarettes will eventually kill you, but you can’t smoke enough nicotine at one time to actually have a fatal overdose from it, like you can ingesting heroin or cocaine. 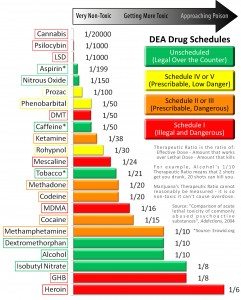 Addiction: A “hard drug” ought to also be one that is hard to kick, one that can kill you through its withdrawal phase if you’re not careful. Heroin, cocaine, and meth certainly fall within this category. Even if withdrawal can’t kill you, some drugs are still terribly addictive, like nicotine in tobacco cigarettes, and that addiction eventually kills you. 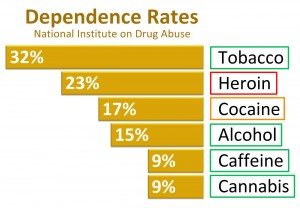 Cocaine caused dependence for about one-sixth (16.7%) of the people who tried it. Stimulants, like meth, came in at about one-in-nine (11.2%), while marijuana was down at the bottom with caffeine, with only about one-eleventh (9.1%) becoming dependent on the herb.

And alcohol? It’s at 15.4% user dependence rate. Close to cocaine.

Health Effects: Everybody knows that the junkie is a pale derelict who will commit desperate acts to get a fix. The crackhead is twitchy and restless and ready to steal your bike. The speed freak is covered in sores with bad teeth. Of course heroin, cocaine, and meth are “hard drugs”.

In actuality, those stereotypes are the exception, not the rule. Remember the dependence rates we listed above? Well, if one-out-of-three people that try heroin become dependent, doesn’t that mean two-out-of-three do not? And for those who are addicted to these hard drugs, often the criminality of being a drug addict means unemployment and lack of health care that lead to desperate acts of crime. After all, Robert Downey Jr. was quite the addict back in the day, but he never ended up with a rotten mouth and terrible skin, homeless and begging for change, because he’s rich.

Alcohol is unique among all the drugs we’ve been talking about regarding how it affects the body. LSD can warp your mind. Cocaine can ruin your nose and explode your heart, as can meth. Heroin can stop your lungs from breathing. But only alcohol excess can harm every single organ of your body. It kills brain cells, causes mouth, throat, and larynx cancer, disrupts lung proteins that keep fluids out, increases heart rate and blood pressure, destroys the liver, causes excess stomach acid, interferes with kidney function, reduces pancreatic function, damages the small and large intestine, it even dehydrates the skin.

By every measure, alcohol is not only a drug, it belongs in the same class as the “hard drugs”.