President Obama added to his criminal justice reform legacy by commuting the sentences of 61 federal drug offenders, bringing his total number of commutations to 248, more than the previous 6 presidents combines. Criminal justice policy reformers had high hopes upon President Obama, with many backing him over Hillary Clinton in 2008.

Elections have consequences as they say and then-Senator Barack Obama was more progressive than Clinton on a few key criminal justice policy changes, including the review of mandatory minimum sentences, marijuana law reform, and ending the sentencing disparity between crack and cocaine. President hasn’t fulfilled all of his criminal justice reform promises, but when graded on a curve compared to his predecessors, President Obama’s domestic criminal justice legacy should be commended, not just on what he has accomplished, but where he has helped move the national debate, particularly among the Democratic Party. 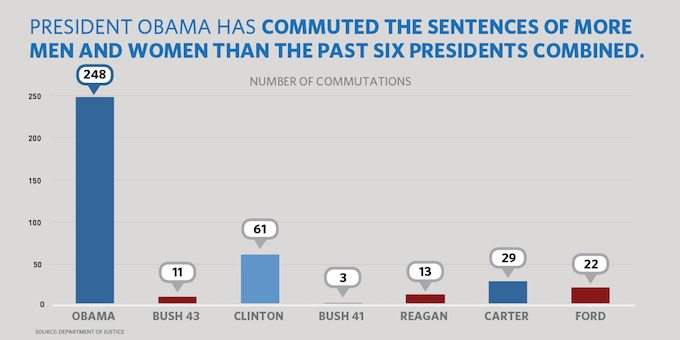 Bernie Sanders’ criminal justice platform is extremely progressive and Hillary Clinton is more progressive on than she was 2008. Republicans are also moving more towards sensible law reforms, making the issue much more bipartisan, although, of course, political gridlock is slowing down progress.

President Obama, after his electoral victory, had some of his hope boiled out of him and his permanent reforms have been moderate comprises, instead of dramatic changes: crack versus cocaine sentencing disparity was improved, but not completely fixed; mandatory minimum reforms have been studied, but not widely improved; and his Justice Department stopped federal raids of state-legal marijuana businesses (after a rocky start), but no movement towards federal decriminalization. Even though President Obama was much more moderate than candidate Barack Obama, his commutations, and his impact upon our national political discourse, have cemented his criminal justice reform legacy. The great news is that the president has indicated that more commutations will follow and our nation seems poised for more good reforms.