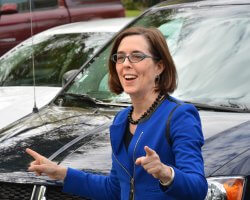 With the property and freedom of their constituents being threatened by the federal government, the governors of several cannabis-legal states have sent a clear hands-off message to the feds. Cannabis now has some degree of medical legalization in 28 states and is legal for full adult use in eight states and Washington DC.  But Attorney General (and marijuana-hater) Jeff Sessions has indicated that he will be increasing federal enforcement.

Along with the governors of Washington, Alaska, and Colorado, Oregon Governor Kate Brown was clear in her letter to Sessions and Treasury Secretary Steve Mnuchin. Don’t junk the Obama-era Cole memo that allows cannabis possession and business in legal states.

Overhauling the Cole Memo is sure to produce unintended and harmful consequences. Changes that hurt the regulated market would divert existing marijuana product into the black market and increase dangerous activity in both our states and our neighboring states.

The governors also asked for the continued guidance of Financial Crimes Enforcement Network (FinCEN). They stated:

Likewise, without the FinCEN guidance, financial institutions will be less willing to provide services to marijuana-related businesses. This would force industry participants to be even more cash reliant, posing safety risks both to the public and to state regulators conducting enforcement activity.

The four western governors noted that now more than 60 percent of Americans live in states with some degree of legalization.

The Cole Memo and FinCEN guidance strike a reasonable balance between allowing the states to enact reasonable regulations and the federal government’s interest in controlling some of the collateral consequences of legalization.

As in other legal states, Oregon’s economy is booming, in no small part to cannabis related jobs and investment. “These are good paying jobs. It’s a pretty diverse business community. Let our people grow these jobs, ” implored Governor Brown. The state’s tax revenue from marijuana sales is substantial and far beyond initial estimates. In an AP interview, Oregon’s Governor Kate Brown elaborated:

This administration very clearly wants to grow the economy and create jobs, and the other piece that they want is to have the states be the laboratories of democracy. There is no better type of laboratory than the initiative process, and voters in Oregon and Washington and California and Alaska and Nevada, and there’s a few other states, have voted to legalize marijuana. On the West coast alone, that’s 49 million people.

In Oregon, Attorney General Ellen Rosenblum has the governor’s back and is ready to go to court to protect Oregonians. So far response by state leaders to the threats posed by the new administration to cannabis users and businesses in legal states has been gratifying.

But a large worry remains: even if Sessions abides totally with the Cole Memo, he could still oversee a brutal war on marijuana by focusing on violation to the memo. As reported recently, the Drug Enforcement Division of the Oregon State Police claims that most of Oregon’s medical marijuana is being diverted, much of it to other states, a key violation of the memo. Quite probably, this sets the stage fierce federal prosecutions of citizens of Oregon and other legal states. Hopefully, new federal legislation, some of it from the Oregon delegation, will help end the war on marijuana.