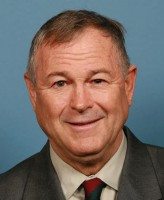 Too often, marijuana legalization is seen as a liberal, Democratic policy ideal that is opposed by conservative Republicans. Congressman Dana Rohrabacher, who worked as a speechwriter for conservative icon Ronald Reagan, is doing his part to educate the public and his fellow Republican colleagues, that ending cannabis prohibition includes the conservative ideals of personal liberty, states’ rights and limited government. At the International Cannabis Business Conference, the Orange County Republican was even willing to sit down for Marijuana Politics with convicted drug dealer “Freeway” Ricky Ross to both listen to the felon-turned-author as well as promote the need to reform our marijuana nation’s marijuana laws.

Representative Rohrabacher chastised his GOP colleagues to support the Farr-Rohrabacher Amendment added to the Justice Department spending bill that prohibits any federal funds from being utilized to investigate, prosecute or convict citizens for medical marijuana if they are acting legally under state law. Rohrabacher told his conservative allies that he didn’t want to hear them proclaim their support for states’ rights, personal liberty or the sanctity of the doctor-patient relationship if they didn’t support the medical marijuana amendment. Eventually, Rep. Rohrabacher was joined by about 50 of his fellow GOP representatives, while nearly all Democratic House members supported the amendment. Despite the disparity among the parties, Rohrabacher’s efforts are gaining votes and publicity for the legalization cause, making him one of the most important marijuana law reformers in the country.

Politicians don’t get much more conservative than Orange County Rep. Dana Rohrabacher. He was Ronald Reagan’s speechwriter, an inspiration behind California’s anti-immigration Proposition 187, a Cold War hardliner, and a man who self-deprecatingly calls himself a “Neanderthal Republican.”

But now, Rohrabacher has emerged as a national leader in one not-so-conservative issue: legalizing marijuana.

“The marijuana laws have been used to expand the power of government over people’s lives more than just anything else I can think of,” Rohrabacher said recently in San Francisco, shortly after a prime speaking slot at the International Cannabis Business Conference. “I would like marijuana to be treated the same way we treat alcohol.”

As marijuana legalization continues its mainstream march away from the coasts and into America’s Heartland, the support of conservatives and Republicans will become even more important to convince voters and politicians across the country. Two-term Republican Governor Gary Johnson is also a prominent GOP member (he will be keynoting the Oregon Medical Marijuana Business Conference on March 15-16) while Rand Paul has shown a willingness to be sensible on the issue, although not as supportive as his father Ron. However, as the Republican Party looks to expand its base, cannabis legalization may very well prove to be a key issue as it appeals to libertarians and Millenials, two groups that can easily find their way into the GOP tent. Thanks in large party to Dana Rohrabacher, legalization certainly has the potential to be a bipartisan issue not beholden to any one party or ideology and that is a great development in the fight to bring more freedom and prosperity to the cannabis community, and all Americans.