Cannabis is a Pathway from Opiate Addiction 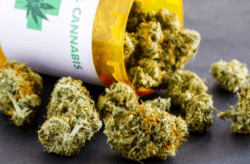 President Trump’s Opioid Commission, chaired by Governor Chris Christie, has released their findings. The report calls for the president to declare a national state of emergency and recommends a few ways to curtail opiate related deaths and overdoses. Many critics of the the report have stated that while the report is a good start, it does the country a disservice by not looking at using cannabis as a method of harm reduction and ending opiate addiction.

While the concept of “harm reduction” is a relatively new thing for Americans (“Hillary is just as bad as Trump!),  replacing a harmful habit with a less harmful habit is always a good idea. For the longest time, prohibitionists painted cannabis as a “gateway” drug, meaning that cannabis was so addicting and insidious that even a casual user would eventually end up using “harder” drugs like heroin and meth. This is of course poppycock, and new research has shown that sometimes cannabis can be a “pathway” drug, acting as a safer alternative to people suffering from opioid addiction. Too much cannabis won’t kill you; too much Fentanyl will kill you in a hurry. States that allow medical or adult use cannabis have seen a 25% reduction in opioid related overdose deaths. There are some programs in Boston that have had great success using medicinal cannabis (in addition to other therapies) to wean people from “harder” drugs. Perhaps the DEA could fund a study. Heh.

Anything can be addictive: Weed, butter, yoga, religion, fascism, whatever. Anything. As vices, go, marijuana is fairly easy to kick. Not only that, but weed has been shown to help people with serious opiate addictions. A study from Columbia University shows that the addicts that used cannabis as a path away from opiates regularly stayed cleaner longer. Back in the 90’s , CHAMP (Cannabis Helps Alleviate Medical Problems), an OG medical marijuana dispensary in San Francisco, had great success using hash oil as a way to get people off of heroin, oxycontin, and other dangerous narcotics. I’ve said it before, and it’s still true: Marijuana isn’t a gateway to harder drugs, it’s a pathway toward safer drugs.

PS. cannabis can also help people with their nicotine addiction. According to a 2013 study published in the Journal of Addictive Behaviors, people given a high CBD vape pen to to help deal with nicotine cravings smoked fewer cigarettes than the people using a placebo pin. And while one small test isn’t a scientific proof, it could very well be that cannabis can also help people quit smoking cigarettes. Surprise.

Ngaio Bealum is a writer, comedian, cannabis activist, and a decent juggler. You can catch him on the road performing at events like the Dope Show in Tacoma, Washington, and MCing the International Cannabis Business Conference. Follow him on the social medias. @ngaio420